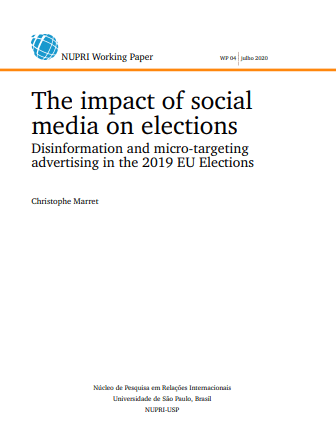 The impact of social media on elections

Disinformation and micro-targeting advertising in the 2019 EU Elections

The Facebook/Cambridge Analytica case concerning the alleged unlawful processing of personal user data acquired from Facebook by the company Cambridge Analytica raised serious concerns on the impact of data protection infringements on the 2016 US presidential elections and the 2017 UK general elections. For the first time, European political leaders and citizens realized that social networks could also be harmful to the democratic process of elections (Potemkina 2019). The institutions of the European Union seem to have rapidly reacted after this case to adapt their own legislation to this new threat to democracy (GDPR, ePrivacy Directive and Regulation project, amendments of key regulations on political parties financing, and framework of actors’ responsibilities, being among the most important decisions taken).

This article focuses on two potentially dangerous effects ofdigital platforms in the electoral context: the viral proliferation of fake news (disinformation), and the unlawful use of citizens’ personal data to target specific groups of strategic voters (micro-targeting and profiling). In both cases, these can manipulate the electoral choice of masses of voters and ultimately interfere with the sincerity of the electoral results (Alemanno 2018).

Based on a limited academic literature and official reports review (Alemanno 2018; Bode and Vraga 2015; Clayton et al. 2019; European Commission 2018b; European Parliament and the Council 2019; Haciyakupoglu et al. 2018; Lewandowsky et al. 2012; Mena 2019; Nyhan and Reifler 2010; Pennycook et al. 2020) this article argues that there are three normative solutions to combat disinformation: the co-regulation, the legislative and the coercive approaches. The European Union chose the coregulation approach which seems to be the best way, if better supervised (detecting and swamping fake news with other sources of information). On the other hand, the legislative and coercive approaches seem to be counterproductive as they could reinforce the auto-persuasion power of fake news.

Finally, this paper searches to highlight the bureaucratic approach of the European strategy and evaluates the degree of difficulty to enforce it in a new digital economy (for future elections): the advent of the “pluralist model of speech regulation” where the latter is only effective with the goodwill of publicly identified actors. In particular, it is necessary to focus on the new threat of the “satellite” digital campaigns organized by undefined actors and therefore, apparently impossible to be regulated with the current EU model.

For this reason, it seems important to continue developing other types of measures to combat the disinformation phenomenon, such as fact-checking education at school, and a better collaboration between public authorities, digital industry, and society. Besides this introduction, section one discusses the different approaches to combat fake news on the social networks, section two presents the specific response of the EU to the challenge of the political microtargeting strategies used on those social networks, and section three balances the limits of the EU bureaucratic approach in our digital environment.

Christophe Marret holds an MBA from EMLyon, France. He is a Master’s student at the Institute of International Relations (IRI) of the University of Sao Paulo (USP), Brazil.